Original Shelley rectangle side lift jack. Original used Shelley rectangle side lift jack. Jack is 21 inches and the lift bar is a 9 inches long 1.25 inch wide/tall square. Features attached jack handle with wood grip. Multiple jacks are available, and photos serve as representation of condition of the jacks. May or may not include the “Shelley Rollalift. Pat No.865130” label. Jacks are operational but we do not suggest jacking your car using this jack. Please call 1-800-875-5247 or email info@welshent.com for more information regarding this jack and other original jacks we haveavailable for sale. 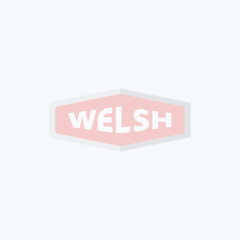 This is a USED item. Please contact us at 800-875-5247 or email info@welshent.com with any questions.Horn Assembly and Turn Signal Switch

Engine # Part # Foundry # Foundry Head # Type W35XX-8 C2242 WYF __417 ? Early XK120 C2242 cylinder head recently received from a buy-out. In good rebuildable shape. Please Note: C2242 heads with individual circular spark plug openings was a casting design feature of cylinder heads cast at ‘West Yorkshire Foundry" (WYF). Submit A Reasonable Offer or call our sales staff directly at 1-800-875-5247 (Domestic) 1+740-282-8649 (International)Welsh is able to offer very competitive shipping rates on oversized items. Call our sales department for more details and to obtain a shipping quote.About the C2242: The C2242 cylinder head was designed by Harry Westlake of Westlake & Co, Ltd. and was originally cast in the UK by William Mills Ltd. of Wednesbury and West Yorkshire Foundries Ltd. of Leeds. It is made of RR.50 aluminum alloy which was chosen over other materials to save weight (50 lb. vs. 120 lb.) During the first two years of production, the XK120 was fitted mainly with cylinder heads forged by William Mills. The West Yorkshire produced heads found their home primarily in the Mk. VII. Determining the origin of the two foundries'' cylinder heads involves looking for differences in the casting around the middle spark plug drillings. William Mills heads were in two elliptical troughs while the West Yorkshire heads featured four separate circular troughs. In the spring of 1953 the two casting forms were unified with the 4 separated trough design prevailing. At this point the casting marks (WM and WYF) were the only way to differentiate between the two foundries, though some early heads did not carry any marks. (Reference: Jaguar XK120 The Anatomy of a Cult Object by Urs Schmid)